Two of the women arrested, Shima Babaii and Leila Faraji, had their homes searched and belongings confiscated by the intelligence ministry agents.

Women across Iran are removing their headscarves to fight back against the required Islamic dress code, with videos and photos on social media showing women waving their hijabs.

Recent anti-hijab rallies were inspired by a lone female demonstrator who, while standing in central Tehran, waved her white headscarf on a stick. Tehran police say the women arrested were “deceived” into joining the protests.

Sohelia Jolodarzadeh, a member of Iran’s parliament, said the protests are due to the government’s “wrong approach.”

“We imposed restrictions on women and put them under unnecessary restrains. This is why … girls of Enghelab Street are putting their headscarves on a stick,” Jolodarzadeh said.

Iran’s prosecutor general, Mohammad Jafar Montazeri, said Wednesday the hijab protests were being instigated “from outside the country.” Masih Alinejad, a U.S.-based journalist and anti-hijab activist, said they started inside Iran and were not influenced from abroad.

“The Iranian police announced in 2014 that they’ve warned, arrested or sent to court nearly 3.6 million women because of having bad hijab, so these arrests are not new, if people are protesting it’s exactly because of such a crackdown,” Alinejad told The Guardian.

Alinejad runs the website My Stealthy Freedom, in which women in Iran post pictures of themselves in public without their headscarves.

A few months after the 1979 revolution in Iran, compulsory laws forcing women to cover their heads and wear loose clothing came into effect. Women who don’t comply by the law could face fines or even jail time.

Holly Dagnes, an Iranian-American analyst told Al Jazeera that authorities in the country are “very much aware” of public disdain for hijab laws.

“It’s evident by the fact that the morality police are on constant patrol of the streets of major cities like Tehran,” Dagnes said. 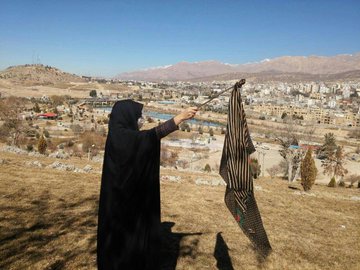 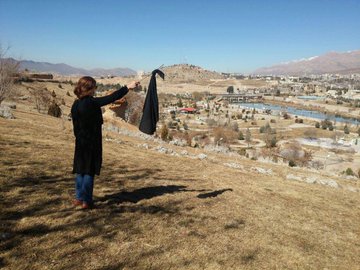 Two friends, one against the hijab, the other for, have sent their pix to @RadioFarda_ from Yasouj in southwestern Iran to express support for women protesting compulsory hijab #دختران_خیابان_انقلاب