Speaking with the U.N. chief at a joint news conference in Jerusalem, Netanyahu said “there is no question that we’ve had a troubled relationship with the U.N.

“I think it has an absurd obsession with Israel, flagrantly discriminatory tactics. You don’t have to be the Israeli prime minister to understand that.”

Netanyahu rattled off a number of allegations.

He said the United Nations has failed to prevent arms from being smuggled to Lebanon’s Shiite Hezbollah militants, while allowing Iran to build sites in Syria and Lebanon for the manufacture of “precision-guided missiles.”

“Iran is busy turning Syria into a base of military entrenchment, and it wants to use Syria and Lebanon as warfronts against its declared goal to eradicate Israel,” Netanyahu said. “This is something Israel cannot accept. This is something the U.N. should not accept.”

Netanyahu also criticized Guterres about the U.N. peacekeeping force in neighboring Lebanon, known as UNIFIL, saying they have turned a blind eye to an arms build-up by Hezbollah.

Guterres said he will do everything in his power to ensure UNIFIL fulfills its obligations. The United Nations is expected to vote on renewal of the force’s mandate for a year.

U.N. Security Council Resolution 1701 set the terms for the end of the Second Lebanon War in 2006.

Guterres backs a two-state solution with the Palestinians — something Israel opposes — and he said obstacles include Israeli settlement building.

“I dream that I will have the chance to see in the Holy Land two states able to live together in mutual recognition, but also in peace and security,” Guterres said at Netanyahu’s office. He urged an improvement in economic and social conditions for Palestinians.

In May, UNESCO, the body’s cultural agency, passed a resolution that criticized Israel’s actions in occupied Jerusalem and the Gaza Strip.

In July, UNESCO listed the Old City of Hebron in West Bank as an endangered Palestinian world heritage site. In return, Netanyahu slashed the U.N. membership contribution by $10 million.

Although Guterres said he does not always agree with the country’s policies, he said those who call for Israel’s destruction are involved a “form of modern anti-Semitism.”

He vowed to curb all forms of racism and bigotry.

President Reuven Rivlin, who met with the U.N. leader at the president’s residence, said that Israel is pleased with his “brave leadership” in fighting discrimination against the Jewish state in the United Nations.

“No member state in the UN should be allowed to behave like that,” he said. “These actions weaken cooperation between states and are against the rule of law.”

Guterres noted the U.N. charter values impartiality. “And impartiality means treating all state equally, and I am totally committed to that in my action and in everything I can do for the organization I lead,” he said.

Guterres, who arrived in Tel Aviv on Sunday, plans to travel to Ramallah on the West Bank for talks with Palestinian Prime Minister Rami Hamdallah.

He then will travel to the Gaza Strip on Wednesday. Palestinian President Mahmoud Abbas, who is visiting Turkey, is not expected to meet Guterres during the trip.

Guterres’ trip to the Mideast is his first since taking office at the start of the year. 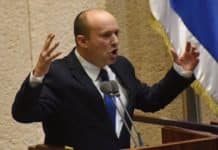