ATLANTA, June 7 (UPI) — The center of the Milky Way is filled with newborn stars, but has very few old stars, or red giants. New computer simulations, designed and run by astrophysicists at the Georgia Institute of Technology, are helping to explain why.

According to the crunched numbers, it’s possible several red giants remain at the heart of the Milky Way galaxy but are simply too faint and extremely hard to spot with a telescope.

Red giants are extremely old stars 10 or more times more massive than the sun. To see what may have happened to these ancient stars, researchers built a model to understand how they might have interacted with the dense disk of gas that used to occupy the Milky Way’s center.

The simulations suggest red giants could have been stripped of their mass as they passed through this dense disk — their luminosity diminished with each collision.

“Red giants could have lost a significant portion of their mass only if the disk was very massive and dense,” Tamara Bogdanovic, an assistant professor of astrophysics at Georgia Tech, explained in a news release. “So dense, that gravity would have already fragmented the disk on its own, helping to form massive clumps that became the building blocks of a new generation of stars.”

These friction-filled encounters would have happened 4 to 8 million years ago, roughly the age of the young stars now found in the middle of the galaxy.

If the process played out as the simulation suggests, researchers say the gas disk must have been significantly more massive than the collection of stars it eventually spawned.

In addition to stripping mass, the ancient collisions likely slowed the trajectory of the red giants, pulling them closer to the black hole at the very center of the Milky Way. Their spin rates — naturally slow — were also likely accelerated.

“We don’t know very much about the conditions that led to the most recent episode of star formation in the galactic center or whether this region of the galaxy could have contained so much gas,” Bogdanovic said. “If it did, we expect that it would presently house under-luminous red giants with smaller orbits, spinning more rapidly than expected.”

The new step is to find direct evidence of these hiding red giants.

“If such population of red giants is observed, among a small number that are still above the detection threshold, it would provide direct support for the star-disk collision hypothesis and allow us to learn more about the origins of the Milky Way,” Bogdanovic concluded.

The new research was published this week in the Astrophysical Journal. 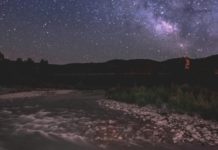 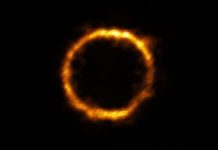 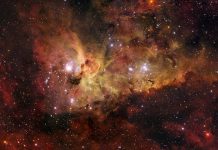