April 24 (UPI) — Scientists have developed a new nanoparticle that can absorb near-infrared light and re-emit it as visible light, which could allow solar panels to convert unseen light into usable energy.

Most solar technologies that focus on visible light fail to absorb near-infrared light, allowing a solid chunk of the solar spectrum to go to waste. Roughly 44 percent of all light that hits Earth’s surface is visible light. Infrared radiation accounts for 49.4 percent. Near-infrared wavelengths are those most similar to visible wavelengths.

Experiments showed the addition of dyes boosted the efficiency of the nanoparticles, amplifying the brightness of the re-emitted light by a factor of 33,000.

The breakthrough, published Monday in the journal Nature Photonics, was preceded by years of experimentation and research.

Scientists had previously shown dyes to enhance the light-converting properties of lanthanide metal ions inside nanocrystals, but researchers couldn’t pinpoint the mechanism responsible. Repeat experiments revealed the dyes to be vulnerable to degradation after repeat exposure to infrared light.

“There was a lot of excitement and then a lot of confusion,” Cohen said. “It had us scratching our heads. Nobody knew exactly how the dyes were interacting with the nanoparticle surface.”

During the most recent experiments, scientists were able to isolate and identify what’s known as a “triplet state” between the dye and the nanoparticles’ lanthanide metal ions. Scientists recorded a match between the measurements of the dye’s light emission and the particles’ light absorption.

By upping the number of metal ions in the nanoparticles, researchers were able to further amplify the triplet state.

“The metals are promoting dyes to their triplet states, which helps to explain both the efficiency of energy transfer and the instability of the dyes, since triplets tend to degrade in air,” Cohen said.

Because the tiny particles are mostly transparent, scientists think they could simply be applied to the surface of photovoltaic cells in solar panels. The particles could boost the ability of the solar cells to harvest energy from infrared without impacting its ability to absorb visible light. 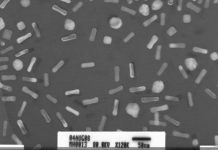 U of U technique uses nanoparticles to deliver oral medication 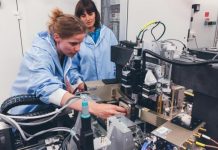 Nanoparticles from tattoos can travel inside the body 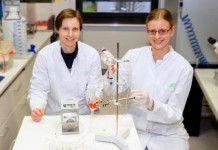