Aug. 9 (UPI) — Authorities have recovered the remains of 36-year-old Quinnyon Wimberly, who was trapped in a New Orleans hotel when it collapsed 10 months ago.

At a press conference Saturday, Mayor LaToya Cantrell said she hoped the removal would offer some closure for family members.

“Words cannot really explain or describe, not only the pain, but the closure that they’ve been wanting for 10 months,” Cantrell said.

Magrette’s body was recovered the day after the collapse.

Arreola’s remains are still trapped at the construction site.

The recovery of the two bodies was delayed repeatedly, and the City of New Orleans took legal action against the hotel’s owner over a timeline for recovery and demolition.

Representatives for 1031 Canal Development, which owns the hotel, said the delays were due to problems with insurance, then a failure to find a contractor for demolition work, then rain, then connectivity issues for some of the equipment used in recovery efforts.

Wimberly’s body was taken to the parish coroner’s office, and it will also be examined by the state medical examiner to “fully document the pain and harm that was caused that ended in death,” Cantrell said.

“I want to see justice for the families as it relates to this tragedy that they experienced and, of course, that this city has experienced,” Cantrell said.

The forensic investigation could take up to two months. 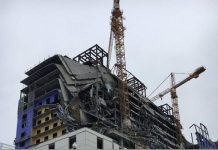