Feb. 11 (UPI) — Imagine the grocery store of the future — drones buzzing about, eyeballing shelves for out-of-stock or misplaced items. Customers using voice-activated assistants to shop and cash in personalized coupons. It’s nearer than you might think.

Both innovations are in development, designed to enhance the in-store experience for customers, retailers and manufacturers — to compete with the speed and convenience of online shopping. The startups behind the technology, Pensa Systems and Birdzi, are portfolio companies of Dallas-based venture firm RevTech.

They are working to give retailers the technology and the tools to “adapt in the age of Amazon,” RevTech Managing Director David Matthews told UPI. The world’s largest online marketplace accounted for just 5 percent of total retail sales in 2018.

“My joke is RevTech works with the other 95 percent,” he said. The venture fund has invested in 38 startups from Silicon Valley to Australia.

RevTech started seven years ago with the idea of helping retail innovate quickly. Unlike healthcare and other industries, retail is unregulated, so change and innovation can happen fast, based on consumer demand.

“A lot of these retailers are in some level of duress that’s well-publicized,” he said.

More customers started buying from Amazon, so stores developed their own online presence, often in competition with a brick-and-mortar counterpart. Then came the idea of omni-channel, where customers can have products delivered in-store or at home, and retailers made it mutually beneficial for customers to buy online or at physical stores.

“Stores finally figured out to not be a disincentive to buy online,” Matthews said.

Retailers go to great lengths to track store inventory throughout the supply chain but once it’s on the shelves it might as well fall into a black hole, said Richard Schwartz, CEO and president of Pensa Systems.

The Austin, Texas-based startup uses small autonomous drones to fly around stores and keep tabs on inventory. The drones are small enough to fit in your hand and, with safety covers around the rotor blades, they are programmed to avoid customers.

“Stock-out rates are bad and only getting worse across all the flavors of retail store formats and fulfillment centers,” Schwartz said. “That’s a major problem for the whole industry and frankly it’s one that’s only getting worse, as there are more combinations of e-commerce, physical stores and pickup at the curb.”

The drones fly to a nest where visual data is downloaded and analyzed down to the the specific barcode to give stores and brands a real-time look at what needs to be restocked. They made a splash at the National Retail Federation conference in New York City last month, and are already in use.

“It was a show stopper — 40,000 people saw it,” Matthews said. “They’re in market now with paid trials with a dozen of the top grocery chains and brands like Anheuser-Busch beer.”

When Pensa approaches retailers, it’s not that hard of a sell, Schwartz said. The alternative is to install all-new smart shelving, similar to Amazon Go, which is too expensive for many retailers — or to have expensive and cumbersome ground-based robots roam the store.

“This is really the next step in the Internet of Things, where the sensor gets around by itself autonomously, instead of having thousands of sensors on the shelves,” Schwartz said. “It’s a massively lower cost that doesn’t force the retailers to build new technology everywhere.”

The company has raised $7.2 million from Silicon Valley venture capitalists, RevTech and Anheuser-Bush InBev. Pensa Systems also got an investment from the founder of Kiva, who sold his robotics company to Amazon for $1 billion. Kiva’s robots now roam the floors of Amazon’s fulfillment centers. The original investor in Kiva also invested in Pensa. 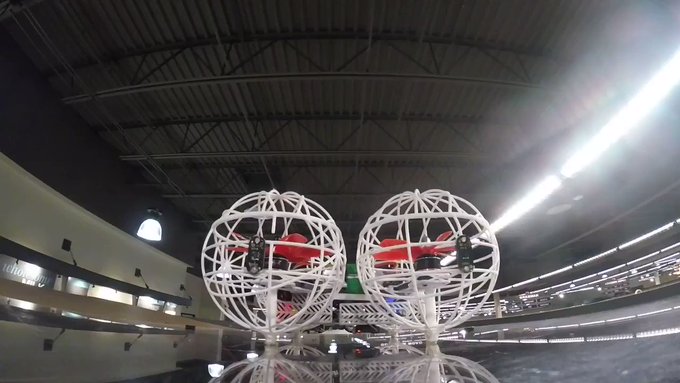 Today we are launching from stealth and showcasing the future of #retail at the @NRFBigShow. See our groundbreaking #drone + data service for brands and retailers, live in the @IntelIoT booth, 3437. #AI #NRF2019 #InventoryVisibility https://www.pensasystems.com/insights-futureofretail/ …

Shekar Raman founded Birdzi, a company that sends personalized discount offers to customers based on their previous buying habits — alerting them to sales and even sending personalized coupons not advertised in the store.

Traditional grocery stores collect mountains of data on customers by using loyalty cards or phone numbers. Birdzi buys that data and makes custom offers that predict what and when shoppers want to buy using an artificial intelligence algorithm.

“We believe retailers can do a better job if they understand their customers better and have a means to communicate with them better,” Raman said. “If I understand their purchase history, I can create more effective promotions and grow the customer base.”

Apps can carry a store’s branding, and customers could input grocery lists before they shop. Birdzi takes the list and offers digital coupons before people shop. This spring, Birdzi will be integrated into voice-activated assistants such as Amazon’s Alexa, Apple’s Siri and Google Home.

The company, based in Iselin, N.J., has partnered with ScriptSave, a prescription savings plan for grocery store pharmacies. The company raised more than $1 million in Series A funding a year ago. The app grades every product in the store based on how healthy or unhealthy it is, and customizes based on a shopper’s medical condition.

“Your health cycle score goes up and we work with health insurance companies so people can prove they are buying healthier, so you can get a discount,” Raman said.

It’s similar to the health insurance companies that reward people for using wearable technology that tracks their steps and exercise each day.

The tolerance level for a shopper, though, is very low if they have a bad experience because there are now so many options.

“We’re at a fork in the road,” Raman said. “For the brick-and-mortar to thrive, you have to be able to leverage data so the experience can be simplified and enriched.”

Birdzi is working with seven grocery store chains, representing several hundred stores from Illinois to New York. The startup is working on deals with three more chains that could put them in 400 to 600 locations.

RevTech focuses on small companies that they can grow and scale, but it says there are other areas to keep an eye on.

Amazon popularized the trend of home delivery and created an on-demand environment in which shoppers expect to receive online purchases the same day, also known as last-mile delivery. Companies including Instacart, Shipt and DoorDash are becoming popular and many use the Uber model, with independent contractors using their personal vehicles to make deliveries.

“The biggest trend that’s attracted capital is last-mile delivery solutions,” Matthews said. “That category attracted more capital than all others added together.”

RevTech hasn’t invested in any last-mile delivery companies, yet, he said.

“Particularly the ability to know the path of a product from inception to purchase,” Matthews said.

Experts say modern shopping has in many ways become a more isolated experience with places like Amazon Go, where shoppers don’t even have to interact with another human being to retrieve their items, Raman said. Innovations and investments from RevTech see a return to that level of personalization.

“We believe that human interaction is a very key element of shopping, we like to see people and touch and feel,” Raman said. “You don’t get that from browsing and clicking and adding to the cart.”