Oct. 8 (UPI) — Chinese Vice Premier Liu He said Tuesday he will lead Beijing’s delegation to attend new U.S. trade talks in Washington, D.C., this week, which come at a time of growing tensions between the feuding nations.

Liu announced he will head the delegation for the high-level economic and trade consultations, scheduled for Thursday and Friday. It will be the 13th round of trade negotiations since the conflict began more than a year ago.

The talks come at a time of heightened tensions. New U.S. sanctions against China are set to take effect next week and a new controversy between the Chinese government and the National Basketball Association is growing by the day.

The South China Morning Post, citing an unnamed official close to the negotiations, reported Tuesday that Beijing’s delegation might also cut short its U.S. trip by one day — leaving Friday instead of Saturday. The source told the newspaper, “There’s not much optimism.”

Prior trade discussions broke down in May after the Trump administration accused China of reneging on promises and Beijing accused Washington of infringing on its economic sovereignty.

Trump said Monday China’s handling of the crisis in Hong Kong could also affect the outcome of this week’s talks. China has demanded the United States stay out of the affair, which has seen protests grow increasingly violent in recent weeks. Also Monday, the U.S. government blacklisted 28 Chinese public security bureaus and artificial intelligence companies over their treatment of Uygur Muslims and other ethnic groups in Xinjiang province. 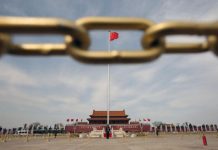