July 28 (UPI) — A newlywed woman has died after being swept away by a river in Alaska as the couple made their way to a site known as the “Magic Bus” in the film, “Into the Wild.”

Varamika Maikamava, 24, from Belarus, had been married to Piotr Markielau, also 24, for less than one month, the Anchorage Daily News reported.

The newlyweds were wading through waist-high water and holding onto a rope to cross the Teklanika River at the upper crossing along the Stampede Trail shortly before midnight Thursday, Ken Marsh, Alaska State Troopers spokesman, said.

Maikamava lost her grip on the rope and her footing and was swept under the water, Marsh added.

Markielau found Maikamava’s body downriver about 75 to 100 feet, troopers said. A trooper and rescue volunteers reached the scene on all-terrain vehicles and sent the body to a state medical examiner.

Recent rainfall had made the waters at the upper crossing run high and swift, troopers said.

They were on their way to Bus 142, along the Stampede Trail, near Healy, a former Fairbanks City Transit System bus abandoned along the trail by a construction company decades ago, Marsh confirmed.

The bus along the Stampede Trail, is known as the “Magic Bus,” popularized in the film “Into the Wild,” about U.S. hitchhiker Christopher McCandless using the bus to survive the Alaskan wilderness during the summer of 1992 only to die of starvation four months later.

The bus was abandoned in its current remote location in the 1960s and made famous after author Jon Krakauer published the book “Into the Wild” in 1996 and a film came out in 2007 named after the book.

Each year there are multiple searches and rescues for hikers stranded or injured on the trail.

In 2010, hiker Claire Ackermann drowned while also attempting to cross the Teklanika River. 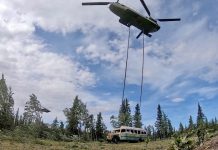