Home US/World News Next half-decade will be hotter than expected, climate scientists predict
Facebook
Twitter
Pinterest
WhatsApp
Aug. 16 (UPI) — Unusually high temperatures are likely to persist for the next five years, according to a new climate prediction model.Over the long run, the climate is certain to get warmer. But global warming isn’t linear. At the beginning of the 21st century, after decades of rising global temperatures, warming slowed. Scientists dubbed the slowdown the global warming hiatus.Now, however, warming appears to be accelerating once more.

Many models require the power of supercomputers and take weeks to run simulations. The new model runs on a laptop and spits out results in a fraction of a second. And the results are comparable to the predictions of more robust models.

Unlike other global warming models, which focus on the effects of manmade carbon emissions, the new simulations account for the probability of weather phenomena absent human impacts — what scientists call “the internal variability of the climate.”

Due the low probability of extreme cold events, the new simulations predict higher than normal temperatures of the next five years.

The simulations also showed the next half-decade is more likely than not to feature extreme sea surface temperatures, increasing the likelihood of tropical storm activity.

Researchers detailed the new predictions and their modeling techniques in the journal Nature Communications.

Traditionally, climate science research is the domain of governments and large academic centers, but the latest findings could democratize climate modeling.

“The important numerical efficiency of the method — a few hundredths of a second on a laptop — opens the possibility for real-time probabilistic predictions carried out on personal mobile devices,” researchers wrote in their new paper. 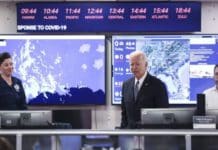 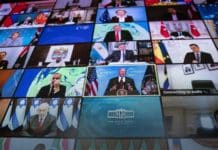 Biden opens climate summit with pledge to cut U.S. emissions in half by 2030