The NHTSA said it’s determining if the recall should expand to include more SUVs from the 2010-2016 model years, after receiving 249 complaints of similar issues with those vehicles.

A recall report shows the ball joints in the windshield wipers may corrode and wear over time, causing one or more wipers to fail, potentially limiting visibility and increasing risk of a crash.

It may be a challenge to reach all owners since possession of the vehicles has likely changed many times since the models are nearly 10 years old, The Truth About Cars reported.

An NHTSA quarterly report shows nearly 269,000 vehicles from the original recall have been repaired.

GM said it recalled the vehicles because the wipers had a higher-than-expected failure rate.

The automaker said it would work with the NHTSA on the investigation. 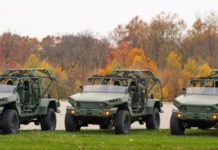