It was the highest figure ever paid for a pair of sneakers, more than four times the previous record. The pair is one of 12 created by the sporting goods brand and the only one to be in unworn condition.

Nike co-founder Bill Bowerman designed the “Moon Shoe” with its waffle-patterned sole after testing the unique pattern by melting rubber on his wife’s waffle iron. Runners wore the shoes at the 1972 Olympic trials.

Collector Miles Nadal purchased the shoes in the online-only auction.

Noah Wunsch, Sotheby’s global head of eCommerce, said the auction house was “excited” about the results of the auction.

“The success of Sotheby’s and Stadium Goods Ultimate Sneaker Collection sale is a testament to the strength of this burgeoning collecting category,” he said.

Nadal purchased another 99 pairs of shoes presented in the Sotheby’s collection with the “Moon Shoes” for $850,000. He offered to buy the “Moon Shoes” as part of the lot, but the seller preferred to keep it available for public auction. The collection included a variety of rare Air Jordans, an Adidas collaboration between Chanel and singer Pharrell Williams, and a pair of Nike Mags inspired by the self-lacing shoes won by Marty McFly in Back to the Future II.

Nadal said he plans to display the collection in his private museum in Toronto.

“I am thrilled to acquire the iconic Nike ‘Moon Shoes,’ one of the rarest pair of sneakers ever produced, and a true historical artifact in sports history and pop culture,” he said. 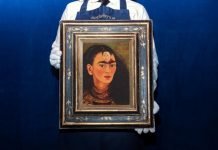