Jan. 6 (UPI) — North Korea is determined to press forward with space development “regardless of any opposition,” according to a South Korean press report.

NK Economy reported Monday a law journal published by Kim Il Sung University in 2019 includes an article on the regime’s efforts to take on space exploration for peaceful and scientific purposes.

The article comes at a time when concerns are rising North Korea could resume staging long-range missile provocations under the guise of satellite launches, including the Kwangmyongsong-5, according to the report.

“It is an undeniable truth that satellites launched into orbit by many countries around the world were made possible by rocket propulsion,” the article said. “Whether or not a projectile used for peaceful satellite launch is an intercontinental ballistic missile depends not on the propulsion of the projectile, but on whether the vehicle is equipped with a satellite or a bomb.”

North Korea continues to pursue satellite launches as its institutions pursue science and technology to develop its economy.

Korean Workers’ Party newspaper Rodong Sinmun reported the vice chairman of the regime’s national science and technology committee said he is “reviewing, revising and adding to the goals” that will “revitalize” North Korea’s economy.

Kim Jong Su suggested North Korea has faced “challenges” in the industrial sector in “recent times,” and his committee is putting in “extra efforts” to overcome problems in production.

North Korea’s warnings in late 2019 and the regime’s promise it would undertake “countermeasures” in response to “hostile forces” has raised the alert level in neighboring countries, including Japan, where network NHK issued a report on Dec. 27, later disproven, that North Korea launched a missile that fell in waters near Hokkaido.

On Monday KCNA condemned NHK for “intentionally tricking” the public in order to create an “atmosphere of fear.”

Kim Jong Un has yet to meet with Japan’s Shinzo Abe, despite Abe’s call for “unconditional talks.” 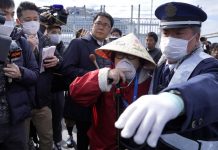