Sept. 26 (UPI) — North Korea media may have misreported events that took place at the 72nd session of the United Nations General Assembly, claiming the Group of 77 adopted a statement condemning unilateral sanctions against Pyongyang.

“The head of the [North Korea] delegation Ri Yong Ho made an address on Sep. 22 at the meeting of the Group of 77 at United Nations headquarters,” KCNA stated.

The G77 is the group of more than 70 developing countries who are also member states of the United Nations.

According to KCNA, “[Ri] said while raising high the banner of anti-imperialism, [North Korea] stands in firm solidarity with all people of countries who advocate for independence to establish a new international economic relationship based on justice, equality and fairness.”

“I will do my part to ensure the solidarity of the group,” Ri said.

“The sanctions are based on the hostile policy of the United States to dominate the Korean peninsula,” Ri said.

“As long as the United States looks down on the political systems of other countries based on unilateral standards and notions, and engage in domestic intervention and acts of aggression, the goals of sustainable development will not be realized,” Ri said.

KCNA then claimed the Group of 77, that includes Egypt, India and Saudi Arabia, adopted a statement denouncing unilateral North Korea sanctions, although no such statement was confirmed by G77.

The state-sanctioned report of Ri’s speech comes at a time when North Korea has been turned down for membership with the International Astronautical Federation.

This is the second time since 2015 North Korea’s National Aerospace Development Administration, or NADA, has attempted to join the IAF. 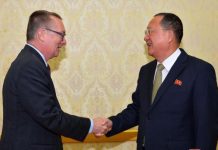