June 22 (UPI) — Amid renewed calls nationwide for controversial statues to be torn down, the American Museum of Natural History announced it has asked the city to permit the removal of a bronze statue of former President Theodore Roosevelt that critics say symbolizes systemic racism.

The statue of the 26th president flanked by walking Native American and African figures was unveiled to the public in front of the museum’s Central Park West entrance in 1940 as part of a larger New York State memorial for Roosevelt but it has long been criticized for its hierarchical composition and depictions of race.

In a memorandum to its staff on Sunday, the museum said it has requested for the Roosevelt equestrian statue to be moved — a request Mayor Bill de Blasio said the city will support.

“The American Museum of Natural History has asked to remove the Theodore Roosevelt statue because it explicitly depicts black and indigenous people as subjugated and racially inferior,” de Blasio said in a statement. “The city supports the museum’s request. It is the right decision and the right time to remove this problematic statue.”

The museum asked for permission to remove the statue as it sits on New York City public parkland, it said.

Ellen Futter, president of the museum, said removing the statue will be “a symbol of progress and of our commitment to build and sustain an inclusive and equitable museum community and broader society.”

The memorandum came amid calls nationwide for the removal of controversial statues, specifically those honoring Confederate soldiers and officials, following Black Lives Matter protests that erupted against inequality after a black man was killed late last month by a white police officer.

Several such statues have been torn down by protesters or removed by politicians since the death of George Floyd while legislation has also been tabled to remove others.

House Speaker Nancy Pelosi, D-Calif., has renewed calls for Confederate statues on Capitol Hill to be removed and last week ordered the removal of four portraits of former speakers who served in the Confederacy.

The museum said it will remain the site of the Roosevelt memorial and that it will name its Hall of Biodiversity after him in honor of his role as a leading conservationist.

Theodore Roosevelt IV, a museum trustee and great-grandson of the late president, said he agrees it is time to move the statue.

“The world does not need statues, relics of another age, that reflect neither the values of the person they intend to honor nor the values of equality and justice,” he said in a statement. “The composition of the equestrian statue does not reflect Theodore Roosevelt’s legacy.” 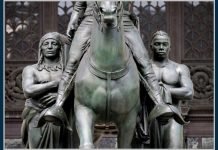