The two officers, who were not identified, were on a patrol with a third officer at the Melrose Jackson Houses, a South Bronx housing complex when they came upon two men in the seventh story stairwell, First Deputy Commissioner Benjamin Tucker told reporters.

One of the men fired at the officers and fled the scene, where he apparently killed himself at the home of an acquaintance. The other suspect is in custody.

The shooting occurred just a few miles away from Lehman College, where Mayor Bill de Blasio was delivering his State of the City Address Thursday, the New York Daily News reported.

The Daily News also reported that the suspected gunman was shot during the gunfight and is in critical condition.

The extent of the injuries received by the officers was not initially known. 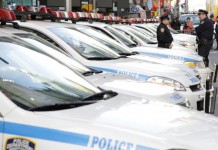