Obama, addressing a question about a travel advisory put out by the United Kingdom’s Foreign Office during a press conference Friday, said U.K. travelers would be met with “extraordinary hospitality” in both states, while speaking alongside British Prime Minister David Cameron.

Obama said North Carolina and Mississippi are “beautiful states” with “wonderful people,” but said the recent legislation was partially in response to some strong emotions that are generated by people, “some of whom are good people.

North Carolina passed the Public Facilities Privacy & Security Act on March 24, banning anyone from using a public bathroom not intended for their biological gender.

Mississippi later passed House Bill the Protecting Freedom of Conscience from Government Discrimination Act, which aims to shield people, religious organizations and other entities acting in a manner consistent with their faith-based convictions without facing potential legal ramifications.

“I just disagree with when it comes to respecting the equal rights of all people, regardless of sexual orientation, whether they’re transgender or gay or lesbian,” Obama said.

Obama added while he respects these different viewpoints, he does not support sending signals that anyone is treated differently.

“I also think that the laws that have been passed there are wrong and should be overturned,” he said.

Cameron also provided some clarification about the travel advisory, saying that the Foreign Office tries to give advice dispassionately and impartially.

“Our view on any of these things is that we believe that we should be trying to use law to end discrimination rather than to embed it or enhance it,” he said. “And that’s something we’re comfortable saying to countries and friends anywhere in the world.” 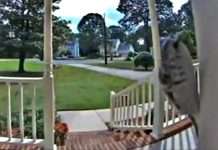