The two leaders held a bilateral meeting on Saturday, during which Xi also said the U.S.-China relationship is at a “hinge moment,” while not mentioning President-elect Donald Trump by name, according to Japan’s Jiji Press.

Obama and Xi have had longstanding differences with regards to issues such as China’s controversial claims to territory in the South China Sea.

But on North Korea the two leaders once again agreed they should work together to denuclearize the Korean peninsula, according to the report.

International sanctions against Pyongyang after its fourth nuclear test in January 2016 were adopted in March with cooperation from Beijing, but a new resolution that could punish Pyongyang for its fifth nuclear test in September has yet to be adopted.

During the APEC talks, and what is his ninth and last meeting with Xi, Obama requested China to more strictly implement current sanctions, and cooperate on new embargoes, according to Jiji.

The two sides also emphasized the progress that was made during Obama’s term in office, including cooperation on the Iran nuclear deal and an agreement to tackle climate change.

While referring to the end of Obama’s term in office, Xi said bilateral relations appear to be at a “hinge moment,” and that China seeks to cooperate with the United States in order to implement ties smoothly.

The meeting comes at a time when South Korean officials continue to hold discussions with experts close to Trump or his transition team.

On Sunday, South Korea’s Deputy National Security Adviser Cho Tae-yong returned to Seoul, and told reporters that after meeting with U.S. advisers he expects a tougher North Korea policy under a Trump administration, according to Yonhap. 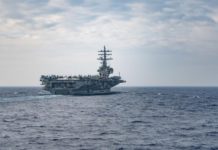