OAKLAND, Calif., Dec. 3 (UPI) — At least nine people are dead and “dozens” more are missing after a fire at an unsanctioned dance party inside a warehouse in California, officials said.

Officials in Oakland said they feared the death toll could reach as high as 40 people once firefighters are able to safely assess the scene.

About 11 p.m. Friday, Oakland firefighters were called to the warehouse that serves as a live/work residence. Firefighters said the blaze quickly got out of control and became a three-alarm fire, indicating additional firefighting units were dispatched. Firefighters said there was no evidence of smoke detectors or a sprinkler system in the building.

Oakland Mayor Libby Schaaf said during a Saturday afternoon press conference the building was permitted as a warehouse and not for residential purposes. The city’s building inspector confirmed the building was the subject of complaints over blight and possible illegal construction and the department had begun investigating the complaints in mid-November.

Schaaf said the city had not issued any permits for Friday’s large gathering.

The blaze took place at an event featuring the DJ Golden Donna, the stage name for emcee Joel Shanahan, who performs under the 100% Silk label. The location of Friday’s dance show was announced on Facebook only a few hours before the event and 285 people used the social media site to “check in” at the concert.

The promoters released a statement on Golden Donna’s Facebook page Saturday: “Joel is safe but like many people he is heartbroken and has several friends among the missing. Please refrain from messaging this page or Joel’s personal channels unless you have information on the Oakland fire victims. Sending love to everyone affected by this horrific event.”

“We still have to do a more thorough search of the building, and we don’t know the potential number of other victims,” Oakland Fire Chief Teresa Deloach-Reed said.

Thus far, firefighters have only been able to recover one body from the warehouse, with structural concerns making it unsafe for firefighters to go inside. Officials said the fire caused one floor of the structure to collapse onto the other. 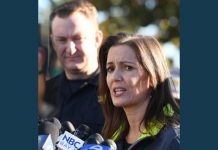