WASHINGTON, Sept. 14 (UPI) — New York City, Philadelphia and Washington, D.C., are preparing for the arrival of Pope Francis next week — and the thousands of dollars being made from the resale of tickets that are supposed to be free.

The pontiff will arrive in Washington on Tuesday, where he will spend three days in the nation’s capital and meet personally with President Barack Obama. Pope Francis will spend a couple days in New York before departing for Philadelphia on Saturday.

Pope Francis is scheduled to return to Rome on Sunday evening.

As three of the East Coast’s largest cities ready for the papal visit, though, authorities are trying to suppress the ongoing sales of tickets to see Pope Francis’s motorcade.

About 80,000 tickets, free of charge, were issued to spectators in New York City through a lottery system. But those tickets have been resold on third-party sites like Craigslist — going for hundreds and even thousands of dollars.

EBay has prohibited the sale of the tickets — a decision applauded by New York Democratic Sen. Chuck Schumer and Craigslist has been pulling scalpers’ ads posted to the site.

The pope’s visit comes a week after a milestone in American Catholic history. Monday marked the 40th anniversary of the canonization of the first U.S.-born saint,Elizabeth Ann Seton.

To canonize a saint, the Catholic Church must determine that a person lived and died in an exemplary and holy way.

Seton’s canonization process began in 1940. She was beatified by the Catholic Church in 1963 and her official declaration of sainthood followed 12 years later. 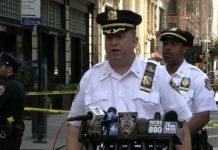