SAN DIEGO, April 2 (UPI) — One person was killed and five others were injured when a small airplane crashed into a car traveling on a San Diego freeway, officials said.

According to the LA Times, there were two people in the aircraft and four in the car. It is not clear if the person who was killed was in the plane or the car.

The crash occurred at approximately 9:15 a.m. local time and blocked two lanes on northbound I-15 near State Route 76.

A Twitter user shared photos from the scene of the crash, showing the small blue and white plane lodged into the back of a black four-door vehicle.

According to FAA spokesman Ian Gregor, the aircraft was a two-seat plane. 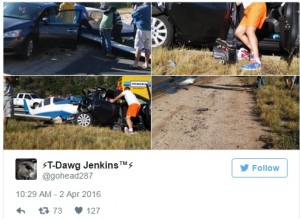