SEASIDE, Ore., Feb. 6 (UPI) — A Seaside police officer was shot and killed Friday night while serving a warrant in the city’s downtown area.

The officer, 39, was shot at 9:24 p.m., allegedly by a suspect who was later shot by another officer.

The suspect was taken to a Clatsop County hospital. His current condition is unknown.

Eyewitnesses told the Daily Astorian the officer attempted to use a Taser on the suspect. The officer was shot at least three times. 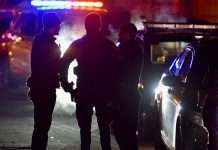