Sept. 19 (UPI) — The contractors responsible for a pedestrian bridge collapse in Miami that killed 6 people in March were fined a total of $86,858 for seven worker-safety violations, the U.S. Department of Labor’s Occupational Safety and Health Administration announced Tuesday.

The OSHA fines were related only to safety for employees at the site of the bridge collapse near Miami’s Florida International University.

Of the six people who were killed, one was an employee: Navaro Brown, who was standing on top of the bridge at the time of the collapse. Five more workers were seriously injured.

The OSHA investigation found violations that included exposing employees to crushing and fall hazards and allowing multiple employees to connect to an improperly installed lifeline.

“Collectively, these employers failed to take appropriate action and provide the necessary protections to their employees while they were working on the bridge on the day it collapsed,” OSHA Regional Administrator Kurt A. Petermeyer said in a statement.

The OSHA fines were the first form of punishment for the bridge contractors, but there could be more.

In addition to several civil lawsuits, the National Transportation Safety Board is investigating the collapse.

According to the Miami Herald, a state law that protects contractors in construction accidents makes it unlikely criminal charges will be brought. 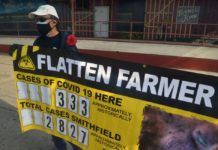