June 2 (UPI) — The MSC Opera, a cruise ship with around 2,150 passengers and 700 crew members, lost control while docking in a narrow canal in Venice, Italy, plowing into a tourist boat Sunday.

Four people suffered minor injuries when the ship crashed into the River Countess boat at San Basilio-Zattere in Venice’s Giudecca Canal at the end of a seven-day cruise, port authorities said.

The incident occurred at 8:30 a.m. on the canal, which is major route leading to the northern Italian city’s famous St. Mark’s Square.

The 13-deck ship was about to dock at a passenger terminal when it had mechanical issues, MSC Cruises said. The ship blared its horn as it was out of control. Panicked passengers fled from the ship.

Two towboats guiding the MSC Opera were unable to stop the cruise ship from going into the much smaller boat.

“The MSC ship had an engine failure, which was immediately reported by the captain,” Davide Calderan, head of a tugboat company involved in accompanying the ship into its berth, told Italian media. “The engine was blocked, but with its thrust on, because the speed was increasing,” he said.

The Opera, which was built 15 years ago, had mechanical trouble in 2011 during a Baltic cruise. The passengers had to disembark in Stockholm instead of continuing voyage from Southampton, England, to Saint Petersburg, Russia.

Residents and politicians have been opposed to the large ships in the narrow canals. They claim the ships are damaging the fragile ecosystem and disrupting the tourist business, including the gondoliers.

“What happened in the port of Venezia is the confirmation of what we have been saying for a long time: cruise ships must not pass through Giudecca,” Italy’s environment minister Sergio Costa posted on Twitter. This is why for months we have been working with the ministers Danilo Toninelli and Bonisoli Alberto to move them and we are close to the solution.”

Venice’s port authority is working to free up the blocked canal.

“In addition to protecting the Unesco heritage city, we have to safeguard the environment, and the safety of citizens and tourists,” Culture Minister Alberto Bonisoli said.

The cruise ship left Venice last Sunday and traveled to Kotor, Montenegro; then Mykonos, Santorini and Corfu in Greece, then Bari, Italy, before returning Sunday to its home port in Venice.

MSC Cruises, the world’s largest privately owned cruise company and No. 1 cruise line in Europe, has trips to South America, South Africa and the Gulf.

The Opera is one of 16 ships, which the company describes on its website as “ultra-modern, highly innovative and elegantly designed.” 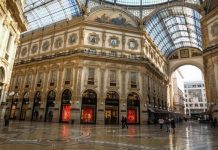