The Los Angeles County Fire Department said 17 children and nine adults experienced minor injuries after the fuel was dumped near the school but no one was hospitalized and there were no orders to evacuate the area.

Delta representative Adrian Gee said Delta Flight 89 departed Los Angeles International Airport en route to Shanghai with 149 passengers on board when it was forced to turn around.

“Shortly after takeoff, Flight 89 from LAX to Shanghai experienced an engine issue requiring the aircraft to return to LAX,” Gee said. “The aircraft landed safely after an emergency fuel release to reduce landing weight.”

Cudhay officials including Mayor Elizabeth Alcantar demanded an explanation for why the fuel was dropped over the school.

“I’m very upset,” Alcantar said. “This is an elementary school, these are small children.” 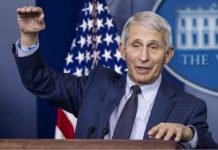