Ryan issued a statement Tuesday after the Committee on House Administration held a hearing as part of its review of the House’s sexual harassment policies, which he said was an “important step” to combatting sexual assault.

“Going forward, the House will adopt a policy of mandatory anti-harassment and anti-discrimination training for all members and staff,” he said. “Our goal is not only to raise awareness, but also make abundantly clear that harassment in any form has no place in this institution.”

During the review, two members of Congress, Rep. Jackie Speier, D-Calif., and Rep. Barbara Comstock, R-Va., shared reports that colleagues sexually harassed staffers and others within the House.

“These harasser propositions such as, ‘are you going to be a good girl?’ to perpetrators exposing their genitals, to victims having their private parts grabbed on the House floor. All they ask as staff members is to be able to work in a hostile-free work environment. They want the system fixed, and the perpetrators held accountable,” Speier said.

She added she had been told two sitting members of Congress had allegedly engaged in sexual harassment.

“I have had numerous meetings with phone calls with staffers, both present and former, women and men who have been subjected to this inexcusable and often illegal behavior,” she said. “In fact, there are two members of Congress, Republican and Democrat, right now, who … have engaged in sexual harassment.”

Comstock said she recently had been informed of a current member of Congress who exposed himself to a female staffer who was delivering materials to his home.

“There is a new recognition of this problem and the need for change of culture that looks the other way because of who the offenders are,” she said. “Whether it’s Bill Cosby, Bill O’Reilly, Mark Halperin, Roger Ailes, Kevin Spacey or one of our own, it’s time to say no more.”

Ryan said the House will work to install proper policies to combat sexual harassment as its review of the matter continues.

“As we work with the administration, ethics, and rules committees to implement mandatory training, we will continue our review to make sure the right policies and resources are in place to prevent and report harassment,” he said. 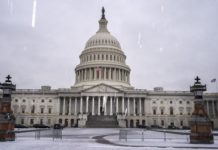