Reps. Jim Banks on Indiana and Jim Jordan of Ohio, who were chosen by House Minority Leader Kevin McCarthy, were rejected by Pelosi to sit on the panel, which will investigate the riot at the U.S. Capitol. Banks and Jordan both voted against certifying the election results.

“We need a comprehensive investigation as to who organized this attack, who paid for it, how they nearly succeeded in overthrowing a presidential election, why they did it and how we must organize ourselves to prevent anything like it from ever happening again,” reads Pelosi’s statement.

McCarthy accused Pelosi of an “egregious abuse of power” in a press conference as he said he would withdraw the rest of his selections if she refused to approve Banks and Jordan.

“Unless Speaker Pelosi reverses course and seats all five Republican nominees, Republicans will not be party to their sham process and will instead pursue our own investigation of the facts,” McCarthy said.

The committee was proposed to have a total of 13 members, eight of those being appointed by Democrats and five appointed by McCarthy.

In June, Pelosi — who has been urging the creation of a 9/11-type commission — introduced the bill to create a committee investigating the Capitol riots. 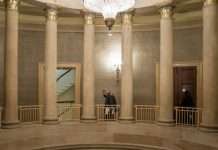 National Archive to turn over some Trump documents to Jan. 6 committee Wednesday