Feb. 5 (UPI) — The U.S. military Friday said a lone suicide bomber was responsible for the Kabul airport blast that killed 13 U.S. troops and more than 150 Afghans in the U.S. effort to evacuate people from Afghanistan.

During a video press briefing Gen. Kenneth McKenzie Jr. told reporters, “The investigation found no definitive proof that anyone was ever hit or killed by gunfire, either U.S. or Afghan.”

The report also cleared Marines of firing any lethal shots into the crowd of Afghans at the Kabul airport’s Abbey Gate entrance where they had gathered in a frantic attempt to flee Afghanistan as the Taliban took over the country.

Gen. McKenzie acknowledged during the briefing that the investigation’s findings contradicted statements he made in the immediate aftermath of the bombing. The Pentagon initially believed the attack was more complex.

The military report said the bomb was detonated by a member of Islamic State-Khorasan using a suicide vest on Aug. 26, 2021.

The military investigation found that the explosion sent 5 mm ball bearings tearing into the crowd at high velocity.

Forty-five U.S. troops were wounded in the blast. First reports said that some Marines and British troops had opened fire in the confusion after the explosion. 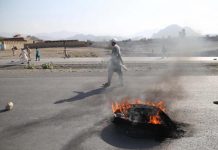 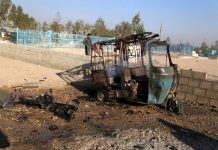 Suicide bomber kills at least 17 at funeral for Afghan official 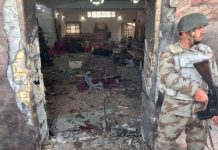