Sept. 4 (UPI) — Transportation Secretary Pete Buttigieg, the first openly gay Cabinet member to be confirmed by the Senate, announced Saturday that he and husband Chasten Buttigieg have become fathers.

In a Twitter post, Buttigieg unveiled a photo of he and Chasten each cradling a newborn child in a hospital bed and announcing their adoption of the boy and girl.

“Chasten and I are beyond thankful for all the kind wishes since first sharing the news that we’re becoming parents,” he wrote. “We are delighted to welcome Penelope Rose and Joseph August Buttigieg to our family.”

The announcement came three weeks after Buttigieg shared that he and Chasten, an author and former teacher, would soon become first-time parents.

Chasten told The Washington Post in July that they have been trying to adopt for a year and have participated in home studies and parenting workshops.

He said that they had been added to a list to that would allow them to adopt children who had been abandoned or surrendered with little notice and through a longer process that included choose them anonymously.

Pete Buttigieg’s late father, a former Notre Dame professor, was also named Joseph. He died shortly after the transportation secretary announced his campaign for the Democratic presidential nomination in 2019. 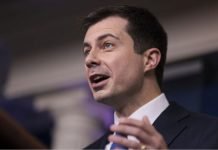