Feb. 13 (UPI) — Philippine President Rodrigo Duterte told the country’s soldiers to target female rebels in combat by shooting them in the genitals, drawing condemnation as his government faces a possible international investigation over alleged extrajudicial killings.

Duterte, addressing a group of former communist rebels Wednesday, referred to his time as mayor before becoming president and ordered the soldiers to render the women “useless” by shooting their vaginas.

“Tell the soldiers. ‘There’s a new order coming from the mayor. We won’t kill you. We will just shoot your vagina,'” he said. “If there is no vagina, it would be useless.”

His comments were met with laughter from the crowd and Duterte’s spokesman, Harry Roque, last week accused women of “overreacting” to the president’s “jokes.”

Duterte has a history of using foul language, and making crude, disparaging and violent comments about women and gay people, calling U.S. Ambassador to the Philippines Phillip Goldberg a “gay son of a bitch” in 2016.

Later that year he expressed regrets that a meeting with Barack Obama was canceled after he referred to the then-president using the Tagalog phrase for “son of a bitch.”

Gabriela Women’s Party, a feminist group, condemned Duterte as a “macho-fascist” and said his remark “takes state terrorism against women and the people to a whole new level.”

“Duterte’s latest nasty remark openly encourages violence against women, contributes to the impunity on such, and further confirms himself as the most dangerous macho-fascist in the government right now,” Gabriela representative Emmi de Jesus said. “He has further presented himself as the epitome of misogyny and fascism terribly rolled in one.”

“It encourages state forces to commit sexual violence during armed conflict, which is a violation of international humanitarian law,” Conde wrote. 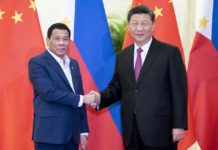 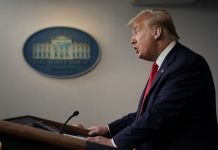