Aug. 16 (UPI) — Physicists at New York University claim they have uncovered a new state of matter that could boost the storage capacity of electronic devices and pave the way for the first generation of quantum computers.

“Our research has succeeded in revealing experimental evidence for a new state of matter — topological superconductivity,” Javad Shabani, an assistant professor of physics at New York University, said in a news release. “This new topological state can be manipulated in ways that could both speed calculation in quantum computing and boost storage.”

The analysis, detailed in a paper published on arXiv, helped scientists understand how a new topological superconductivity phase — a new state of matter — is created.

Researchers were particularly interested in observing Majorana particles, fermions that are their own antiparticles — particles with the same mass but the opposite physical charge. Some scientists suggests Majorana particles could be used to store quantum information.

Unfortunately, quantum physicists have struggled to find a natural host for Majorana particles. However, the topological superconductivity phase, newly measured by scientists, could be used to house Majorana particles, which can insulate quantum information from environmental noise.

“The new discovery of topological superconductivity in a two-dimensional platform paves the way for building scalable topological qubits to not only store quantum information, but also to manipulate the quantum states that are free of error,” Shabani said. 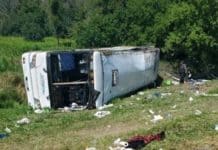