CINCINNATI, March 16 (UPI) — A polar bear at the Cincinnati Zoo & Botanical Garden escaped from its enclosure on Wednesday morning, forcing the zoo to close temporarily.

The zoo wrote on Facebook that the polar bear breached its behind-the-scenes containment area around 11:30 a.m. The zoo moved visitors indoors and stated that there was no potential risk to visitors or staff.

“Visitors are safe to leave the park if they choose. There are no injuries to animal staff or visitors. We are currently working on resolving the situation,” they wrote.

Thane Maynard, president of the zoo, said the escaped bear was the zoo’s resident female, Berit, and said the zoo would investigate the escape once Berit has been returned to her enclosure.

“Once that’s happened, we will have a very big ongoing debriefing situation to see what door got opened and how, and how to make sure that’s secure in the future,” he told WLWT.

The zoo released a second statement around 1:30 p.m. announcing that the situation has been settled, and the zoo has reopened.

“Cincinnati Zoo is now reopen. Polar bears are contained and unharmed. Thank you for your patience,” they wrote. 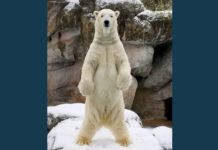