EDNA, Texas, Sept. 24 (UPI) — Six people were killed early Thursday following a police chase on a Texas highway, where a crowded SUV crashed in what authorities believe may be a case of human smuggling.

A police officer attempted to pull over the vehicle on Highway 59 at about 1:30 a.m. local time, officials said, and the driver attempted an escape. Near Edna, Texas, the SUV rolled.

According to police, the Ford Explorer — a vehicle designed to carry a maximum of five people — carried 15. Because Highway 59 stretches from East Texas to the Laredo border, investigators believe the passengers may have been smuggled.

Four people died at the scene, officials said, and two others died later at a hospital. Seven others from the SUV were injured, police said.

Investigators said two people from the SUV fled on foot but were later captured.

Some of the victims are from Honduras and Guatemala, police reportedly said.

Authorities are looking into the case possibly as part of a human smuggling operation. Those treated and released have been turned over to federal immigration officials. 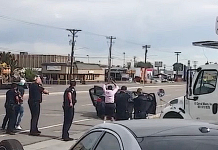 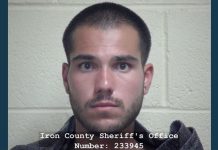 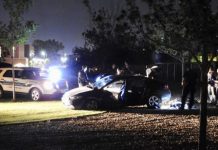 Car with spiked tires smashes through fences at Granger High; 2 in custody