Police made the announcement on the department’s Facebook page Sunday, a day after they said a gunman fired a rifle at random from a vehicle while driving roughly 10 miles through the cities of Odessa and Midland, killing seven people and wounding 22 others.

The announcement of the suspect’s identity followed a Sunday press conference when Odessa Police Chief Michael Gerke said he would not name the suspect.

“I’m not going to give him any notoriety for what he did,” he said. “We’ll provide that information to you but not in this public space.”

Police were still working on a motive for the shooting as there was still no “definitive” reason why the suspect started firing on police, he said.

The shooting spree began during a traffic stop Saturday afternoon when the suspect opened fire on police before driving away down the interstate, shooting at civilians along the way. It ended when police shot and killed the gunman near a Cinergy movie theater in Odessa.

Orlando Alanis, commander of the Texas Department of Public Safety El Paso Region, said the traffic stop that started the shooting was for a failure to signal at the required distance.

He said Trooper Chuck Pryor, who was shot by the suspect during the traffic stop, underwent surgery and is expected to make a full recovery.

Concerning the victims’ identities, Gerke only revealed that they were between 15 and 57 years of age. He also said the gunman used an AR-style rifle and was unsure how he secured the firearm.

Texas Gov. Greg Abbott said during the conference that he was “heartbroken” by the shooting, the second in the state in a month.

“Too many Texans have lost their lives,” he said. “The status quo in Texas is unacceptable and action is needed.”

He said efforts must be broadened in order to find solutions to these mass shootings.

“We need solutions that will keep guns out of the hands of criminals like the killer of Odessa while also ensuring that we safeguard our Second Amendment rights,” he said. “And we must do it fast.”

The shooting in Odessa comes a month after 20 people were killed and 26 others were wounded in a shooting at an El Paso, Texas, Walmart. Patrick Crusius, 21, is being held on state murder charges for the crime. 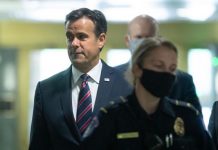 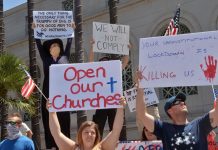