IDAHO FALLS, IDAHO – August 17, 2015 (EastIdahoNews.com/ Nate Sunderland) — The Idaho Falls Police Department has released the name of the man found slain Sunday on a playground structure in Tautphaus Park, according to EastIdahoNews.com.

Deraek Patrick Larson, 31, of Idaho Falls was discovered on playground equipment near the tennis courts and the skateboard park. The police department has not released details as to why Larson was in the park.

Tom Haney of Idaho Falls, who found the body, told EastIdahoNews.com Larson had multiple stab wounds and was covered in blood.

“There were pretty obvious stab wounds in the upper back, and one really big one in the back of the neck,” he said.

Haney said the body was unrecognizable, but he could tell it was a Caucasian male, likely in his 20s. Most of the blood was around his upper body, but he was splattered with blood all around his body. He was wearing only boxers.

Photos of the victim show the man laying face down near the playground slide. Blood was splattered all over the equipment, including what appeared to be bloody hand prints. Blood also had pooled below the body in the gravel.

EastIdahoNews.com has chosen not to release photos of the victim due to their graphic nature.

Authorities taped off a 2 to 3 acre area surrounding the equipment for most of the day. The crime scene was systematically photographed and cataloged by police. Authorities removed the body from the crime scene shortly before 5 p.m.

Idaho Falls Police Chief Mark McBride told EastIdahoNews.com authorities believe the murder took place in the park. Police also said it may have been caused by one or more assailants.

Later in the day police officers dismantled portions of the play structure, which were taken away as evidence.

“We need to process it in a secure environment,” McBride said. “We need to collect finger prints, fibers, and test all the blood.”

Investigators believe Larson was specifically targeted by assailants, according to a police news release. As such they do not believe there is a threat to the public. 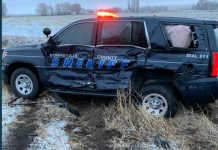 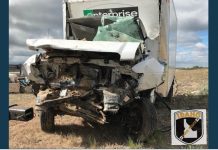