MIAMI, Feb. 21 (UPI) — Police are seeking suspects in the shooting death of a 6-year-old boy who wanted to grow up to be a police officer.

The boy was shot and killed outside his Miami apartment complex on Saturday in what police say was likely a fight between young men.

Witnesses told law enforcement a black four-door sedan rolled up in the parking lot of the Northwest Miami-Dade apartment complex and two unknown males got out and began shooting. Three suspects may have been in the car when it sped from the apartment complex, the Miami Herald reported.

The boy, King Carter, a first-grader at Van E. Blanton Elementary School, was playing with friends outside his apartment when gunfire erupted.

A police officer performed CPR on the child before he was airlifted to the trauma center at Jackson Ryder Memorial Center. It is not clear who was the intended target, ABC 6SouthFlorida reported.

“I was in the house when I heard gunfire. When I came outside I saw my friend’s son on the ground on his side,” said Xavier Robert, who has lived in an upstairs apartment for about three years and used to toss footballs with King.

“This shooting needs to stop. Kids can’t even play outside. This innocent child won’t get to enjoy a full life. I am sad, mad, hurt.”

Miami-Dade Police Director Juan Perez said the shooting was one of dozens that has occurred since last fall, all the result of young men gun-fighting.

“It’s another tragic event involving young males and gun fights for really senseless acts,” he said. “We are not going to stand idle. It’s all hands on deck … We are tired of this.”

“I’m angry, our officers are angry, the community behind me is angry,” he said, “so hopefully they’re angry enough that they could provide some information that will lead to the arrest of these individuals who are responsible for this heinous act.”

A community anti-violence march was planned for Sunday at the apartment complex.

While community members often are hesitant to come forward with information on cases like this, Perez said he thinks people have had enough and will hand over any information they have that may lead to an end to this continued violence.

“I think that the community is going to stand tall and will hand these individuals off to us,” he said. 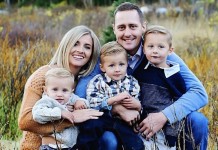