Some attendees carried red-and-white Polish flags, others held up symbols of Christianity. One sign read, “White Europe of brotherly nations,” and another said, “We want God.”

Police estimated about 60,000 people showed up for the nationalist march, while about 2,000 counterprotesters — described by some to be “anti-facist” — also attended. The demonstration also attracted nationalists from other countries.

One protester told state television station TVP he was taking part in the demonstration “to remove Jewry from power.” Others spoke of defending Polish Christian values and standing up to liberals, Britain’s The Independent reported.

Counterprotesters carried rainbow pride flags and shouted out slogans: “For our freedom and yours” and “stop facism.”

Earlier in the day, President Andrzej Duda appeared at an Independence Day event in Pilsudski square. The holiday marks the day Poland regained sovereignty following the armistice of World War I. 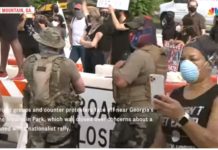 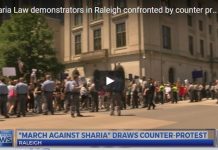