Jan. 27 (UPI) — New research suggests scientists have underestimated the importance of particulate matter as a driver of storm size and intensity.

Scientists have previously proven that aerosols, particles suspended in the atmosphere, can influence weather and climate. With their latest study — published this week in the journal Science — researchers with the Department of Energy’s Pacific Northwest National Laboratory showed the smallest particles can encourage the formation and increase the intensity of storms.

“We showed that the presence of these particles is one reason why some storms become so strong and produce so much rain,” PNNL researcher Jiwen Fan, lead author of the new study, said in a news release. “In a warm and humid area where atmospheric conditions are otherwise very clean, the intrusion of very small particles can make quite an impact.”

In 2014 and 2015, scientists measured a range of climate-related variables, using ground-based and airborne instruments, in the Amazon. The research focused on a large swath of rain forest, untouched except for the incursion of Manaus. With a population of 2 million, Manaus is the largest city in the Amazon.

The region offers scientists a unique opportunity to identify and isolate man-made impacts on climate and weather patterns.

Researchers used the data to explore possible links between thunderstorms and ultra fine particles, particles measuring less than 50 nanometers wide, a thousandth the width of a human hair.

When strong updrafts carry larger particles into the atmosphere, they can help seed high-altitude clouds that a play an important role in thunderstorm formation. But the newest research shows ultra fine particles can also trigger the formation of thunderstorms.

When large particles are in short supply at high altitudes, the tiny particles can combine with heat and humidity to generate especially large storm clouds.

The absence of large particles allows for an excess of water vapor. The tiny particles offer condensation opportunities and encourage cloud formation. As the water condenses into millions of tiny droplets, heat is released, which drives powerful updrafts, further fueling cloud formation. Scientists have dubbed this process “invigorated convection.”

“We’ve shown that under clean and humid conditions, like those that exist over the ocean and some land in the tropics, tiny aerosols have a big impact on weather and climate and can intensify storms a great deal,” said Fan. “More broadly, the results suggest that from pre-industrial to the present day, human activity possibly may have changed storms in these regions in powerful ways.” 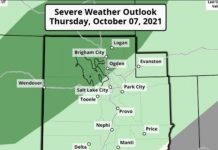