Nov. 24 (UPI) — Pope Francis on Saturday landed in Japan, a place in which he wanted to become a missionary as a young man.

Referring to Francis’ birth name, Jorge Mario Bergoglio, Vatican News reported that he had requested to be assigned to the East Asian nation as a young Jesuit in Argentina.

Shortly after his arrival, Francis recalled his dream to become a missionary to Japan in a meeting with bishops in Tokyo at the Apostolic Nunciature.

“I don’t know if you are aware of this, but ever since I was young I have felt fondness and affection for these lands,” Francis told the Japanese bishops.

Francis said he was inspired by St. Francis Xavier, who arrived in Japan 470 years ago to begin spreading Christianity, but he was unable to go to Japan to be a missionary due to his health.

“Many years have passed since that missionary impulse, whose realization has been long in coming,” Francis said. “Today the Lord gives me the opportunity to come among you as a missionary pilgrim in the footsteps of great witnesses to the faith.”

Catholics only make up 0.5 percent of the population in the largely secular country and about half of them are foreign nationals.

The Church’s small size “must not diminish your commitment to evangelization,” he told the bishops.

The visit is the second leg of a six-day to trip to Asia, which began in Thailand on Wednesday.

Francis is the second pope to visit Japan.

Pope St. John Paul II, his predecessor, was the first to visit the country in 1981, making stops in Hiroshima, Nagasaki, Tokyo Dome and Sophia University.

Francis plans to similarly travel to Hiroshima and Nagasaki, where he will give speeches at the sites of the 1946 atomic bombings. He will also visit the Jesuit-run Sophia University and the Tokyo Dome, where he will celebrate Mass on Monday, the last full day of his trip, and meet with the prime minister and emperor.

As part of his visit, he will also meet with victims of the 2011 major earthquake and subsequent tsunami that sparked a meltdown at Fukushima Daiichi nuclear power plant.

Regarding the atomic bombings, Francis said he wanted to meet “those who still bear the wounds of this tragic episode in human history.”

“Their continued sufferings are an eloquent reminder of our human and Christian duty to assist those who are troubled in body and spirit, and to offer to all the Gospel message of hope, healing and reconciliation,” he added.

The motto of Francis’ visit to Japan is “protect all life.”

“Let us entrust to the Lord’s mercy those who have died, their families and all who have lost their homes and material possessions,” he said. “May we never be afraid to pursue, here and throughout the world, a mission capable of speaking out and defending all life as a precious gift from the Lord.” 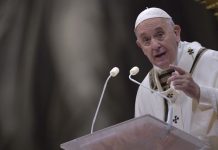 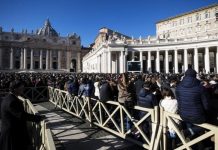