VATICAN CITY, Dec. 7 (UPI) — The Catholic Church will begin its Extraordinary Jubilee of Mercy on Tuesday, a nearly year-long event called for by Pope Francis on a topic he has heralded since long before his ascension as pontiff.

Francis called for the jubilee in March, a relatively last-minute decision compared to previous holy years, which are often scheduled decades before they are held. The unplanned nature of the forthcoming jubilee earned it the designation “extraordinary.”

The Extraordinary Jubilee of Mercy will begin on the Solemnity of the Immaculate Conception, the day celebrating the belief of the Virgin Mary’s sinless conception of Jesus. The holy year will end nearly a year later on Nov. 20, 2016, the day of the Solemnity of Our Lord Jesus Christ, King of the Universe — commonly known as the Feast of Christ the King.

Jubilees, or holy years, are regularly held every 25 to 50 years so every Catholic may have a chance to take part in the pilgrimage to Rome in their lifetime. These jubilees are often held to recognize themes or monumental occasions.

The last holy year was the Great Jubilee in 2000, called to commemorate the new millennium and held under Pope John Paul II, who was canonized in 2014. Another jubilee was called in 1983 to commemorate the 1,950th anniversary of the year of redemption — the year Jesus died.

Francis called his extraordinary jubilee to recognize a trait for which he has come to be known — mercy.

The pope has been a messenger of mercy since long before he became the Archbishop of Buenos Aires in 1998 and before he was selected as pope in 2013. He has made countless visits to prisons offering absolution throughout his religious career, including a stop in Philadelphia’s largest prison, the Curran-Fromhold Correctional Facility, during his papal visit to the United States in September.

Although Francis has not explicitly stated the reason he called the extraordinary jubilee without the traditional decades of planning, he has often worked to make the church seem inviting and accessible, particularly in the wake of scandals that have rocked the Vatican, including revelations of clerical sexual abuse.

The motto and logo for the Extraordinary Jubilee of Mercy are shown together. The motto — “Merciful Like the Father” — was chosen to serve believers as an invitation to follow the merciful example of God. The logo was made to represent the theme of mercy, where Jesus Christ carries a lost soul upon his shoulders. Image provided by the Pontifical Council for the Promotion of New Evangelization

The motto for the jubilee is “Misericordes Sicut Pater,” meaning “Merciful Like the Father” — similar to the motto Francis chose when ordained as bishop in 1992 and when he was elected pope: “Miserando atque Eligendo”, which translates from Latin to “By having mercy, by choosing Him.”

The church has encouraged its members to make a pilgrimage to Rome during the jubilee by holding special events throughout the year, including a special celebration commemorating and offering mercy to people who are sick, disabled or imprisoned.

For the Extraordinary Jubilee of Mercy, all four major basilicas in Rome will unseal their holy doors, which are usually completely sealed between jubilee years. The holy door will be opened Tuesday at St. Peter’s Basilica, the first time since the Great Jubilee. Others are scheduled to be opened Sunday.

Religious pilgrims will be able to walk through the holy doors to symbolically illustrate their commitment to their beliefs. Pilgrims are offered a path toward salvation when they walk toward the holy doors during the jubilee

Francis, who has been praised as a progressive maverick within the Catholic Church, made two groundbreaking announcements ahead of the jubilee celebration. He said for the first time in the jubilee tradition’s 700-year history, holy doors will be opened at multiple locations throughout the world — including Mexico, the United States, Venezuela, Ghana, India and South Korea — not just in Rome.

Francis also surprised many when he said he will empower priests by giving them discretion during the jubilee to absolve women who have had abortions.

“The tragedy of abortion is experienced by some with a superficial awareness, as if not realizing the extreme harm that such an act entails. Many others, on the other hand, although experiencing this moment as a defeat, believe they they have no other option,” Francis wrote in a letter detailing several mandates he set for the jubilee.

“I have met so many women who bear in their heart the scar of this agonizing and painful decision. The forgiveness of God cannot be denied to one who has repented. For this reason too, I have decided… to concede to all priests for the jubilee year the discretion to absolve of the sin of abortion those who have procured it and who, with contrite heart, seek forgiveness for it.”

This all-inclusive approach to this year’s jubilee is a trademark of the pope’s efforts to make Catholicism a more inviting faith.

Sticking with the theme of mercy and forgiveness, the Vatican released an official song — “Hymn of the Jubilee of Mercy” — recognizing the jubilee and asking believers to praise a forgiving God. 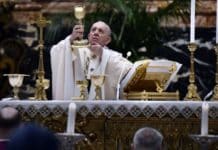