April 27 (UPI) — A Portland, Ore., parade was canceled after organizers reported a threatening email and police offered no additional security.

The Avenue of Roses Parade, scheduled for Saturday, has been held since 2007 to highlight a Portland neighborhood. Political protests in the city have largely been confined to its downtown area, but an email received earlier in the week threatened “the type of riots which happen in downtown Portland” at the parade.

At issue is the presence of the Multnomah County Republican Party, one of many groups which regularly march in the parade. The email demanded that the GOP representatives be barred from the parade or face the possibility that hundreds of people would rush into the parade and “drag and push them out.”

The sender of the email added links to two groups, Direct Action Alliance and Oregon Students Empowered, which are planning demonstrations on the day of the parade. 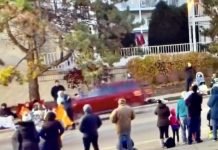