The best time to view the eclipse will be in the early morning in the Middle East, mid-morning in India and Sri Lanka, and early afternoon in Indonesia, but precise times will vary from location to location. People not in this part of the world, or those who are but find themselves under cloudy skies, can watch the eclipse online courtesy of Slooh.

A solar eclipse happens when the moon passes directly between the Earth and the sun, but the type of eclipse that unfolds depends on how far away the moon is from the Earth.

When an eclipse happens when the moon is near perigee, the point in its orbit when it is closest to the Earth, the moon appears large enough to cover the entire face of the sun, resulting in a total solar eclipse.

But on Thursday, the moon will be near apogee, the point in its orbit when it is farthest away from the Earth. As a result, the moon will not quite be large enough to cover the entire sun, leaving behind a ring of light.

This ring of sunlight around the moon during the height of an annular solar eclipse is how it earned the nickname of a ‘ring of fire’ eclipse. The moon passing in front of the sun during an annular solar eclipse on Jan. 4, 2011. Photo by NASA/Hinode/XRT

Spectators will need to use specially designed solar filters or eclipse glasses during the entire event to safely view the eclipse to protect their eyes from the harmful rays from the sun. Looking at the sun without a solar filter can lead to permanent eye damage.

“Similarly, do not look at the sun through a camera, a telescope, binoculars, or any other optical device while using your eclipse glasses or hand-held solar viewer — the concentrated solar rays will damage the filter and enter your eye(s), causing serious injury,” NASA explained on its solar eclipse safety website.

There are still plenty of ways to safely see the eclipse for those who do not have enough time to get solar eclipse glasses by Thursday.

“An alternative method for safe viewing of the partially eclipsed sun is pinhole projection,” NASA said. A simple pinhole projector can be made with a cardboard box or a sheet of paper.

“Or just look at the shadow of a leafy tree during the partial eclipse; you’ll see the ground dappled with crescent suns projected by the tiny spaces between the leaves,” NASA added.

People in this part of the world that who Thursday’s eclipse will only have to wait another six months for the next opportunity to witness a ‘ring of fire’ eclipse.

On June 21, 2020, an annular solar eclipse will once again darken the sky across southern Asia, as well as central Africa.

Two areas will hit the celestial jackpot, sitting in the center of the path of both eclipses; an area just south of Muscat, Oman, and a spot a few miles off the southern coast of Guam.

A more impressive total solar eclipse is now less than one year away with astronomers and eclipse chasers from around the globe planning their trips to Chile and Argentina to stand in the shadow of the moon. 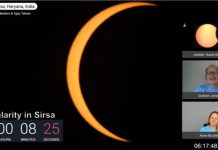