Dec. 30 (UPI) — Thousands of pro-Iranian government supporters gathered in Tehran on Saturday for an annual rally on the heels of two days of anti-government protests across the country.

The demonstration in support of Iran’s ruling clerics had been planned to observe the anniversary of the end of a 2009 pro-reform uprising. Saturday’s gathering of about 2,000 people was peaceful, an eyewitness told CNN.

Though it’s an annual event, the rally was marked by its proximity to protestsin multiple cities denouncing President Hassan Rouhani and high prices.

The nation has gotten out of a recession and inflation has been reduced since the landmark 2015 nuclear deal lifted sanctions. But the official unemployment rate is 12.4 percent, up 1.4 percent from the previous year.

Prices of staples, including eggs, have risen by up to 40 percent recently, which farmers attribute to higher prices for imported feed.

Smaller groups of protesters gathered Saturday, BBC News reported. Interior Minister Abdolrahman Rahmani Fazli told people “not to participate in these illegal gatherings as they will create problems for themselves and other citizens.”

The government blamed foreign powers for stoking the anti-government protests. The Interior Ministry issued a statement Saturday saying the Trump administration is a source of ill will toward Iran.

“There are many reports of peaceful protests by Iranian citizens fed up with the regime’s corruption and its squandering of the nation’s wealth to fund terrorism abroad,” a statement from the office of White House press secretary Sarah Sanders said. “The Iranian government should respect their people’s rights, including their right to express themselves. The world is watching.”

Bahram Ghasemi, spokesman of the Ministry of Foreign Affairs, described the statement as “opportunistic.”

“The great nation of Iran assuredly has witnessed and remembers how human rights have been violated in Bahrain, Yemen and Palestine with active contribution of Mr. Trump who has set limitations on Iranians willing to enter U.S. which has led to prisoning of migrants at U.S. airports for baseless accusations,” he said. 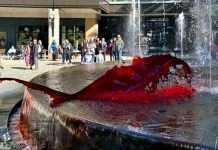 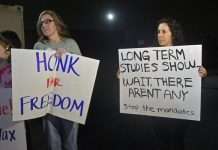 Thousands march on Washington, D.C., in rally against vaccine mandates