Sept. 19 (UPI) — Demonstrators returned to downtown Portland Friday to call for police reforms after taking a hiatus of more than a week due to unhealthy air quality.

The protests had continued for more than 101 days, beginning at the end of May and stalling last week after smoke from wildfires throughout the region choked the city with smoke, with air quality consistently being rated as hazardous or unhealthy until the end of this week.

Portland protesters, many of whom shifted their focus to provide aid to wildfire victims as fires ravaged the state, have generated a four-point list of demands frequently chanted during the demonstrations.

They’ve asked the city to cut the police budget, move the money to social services and grant protesters amnesty from prosecution.

And they’ve repeatedly demanded the resignation of Portland Mayor Ted Wheeler, who is up for re-election in November.

The demonstration was also the first since Wheeler banned local police from using tear gas on crowds.

But that ban doesn’t apply to federal officers, who deployed gas on protesters as they gathered near the city’s Immigration and Customs Enforcement office.

The Portland Police Bureau posted, then deleted, a tweet listing tear gas on the list of crowd control agents that would be used if protesters did not disperse. Later the bureau posted a new tweet that did not mention tear gas.

Asked for clarification on the tweets by KOIN, Sgt. Kevin Allen said the bureau is “required by law to make that warning” but is still prevented from using tear gas.

Police arrested 11 people in connection with the demonstrations, according to a Saturday press release from the Portland Police Bureau. Most were charged with disorderly conduct, interfering with police or both.

Multnomah County District Attorney Mike Schmidt, who was elected earlier this year and took office in August, has said he won’t prosecute demonstrators on charges commonly connected to protests — including disorderly conduct or interfering with an officer — unless there are additional charges that involve deliberate property damage, theft or force against another person or threats of force. 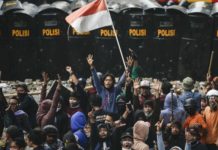