July 22 (UPI) — Following days of mass protests, Puerto Rico Gov. Ricardo Rossello announced Sunday that he will not seek re-election in 2020, though he refused to resign.

The island of Puerto Rico has been rocked by protests demanding Rossello resign following the mid-July leak of hundreds of pages of online private group chats between the Democratic governor and his associates that contained comments targeting politicians, journalists and Puerto Rican citizens that critics say were misogynistic and homophobic.

Rossello was already under scrutiny after two former government officials were arrested on corruption charges.

The embattled governor made the announcement in a 4-minute Facebook Live video, during which he also said he would be stepping down as leader of the island’s New Progressive Party.

“A large portion of the population is unhappy and I recognize it,” he said. “I’ve heard you … Today, I have the responsibility to direct my strengths to try and find alternatives so that with God we may be able to move forward.”

Revealed July 13 by the non-profit Center for Investigative Journalism, the chats between Rossello and his staff contained comments that targeted political opponents and discussed assassinating San Juan Mayor Carmen Yulin Cruz. They also made fun of impoverished Puerto Ricans.

During his address Sunday, he acknowledged that he had made “mistakes” and said he realizes that “asking for forgiveness is not enough.”

He said because of this, he welcomes the Puerto Rico House of representatives pursuit of impeachment, which began Thursday.

“I will face [it] with truthfulness, strength and in a responsible manner,” he said.

Rossello’s announcement comes as notable Democrats running for their party’s nomination for president in the 2020 election, including South Bend Mayor Pete Buttigieg and Sens. Elizabeth Warren and Bernie Sanders, have been urging him to step down.

“I stand with the people of Puerto Rico in their fight against corruption and join them in calling for the immediate resignation of Gov. Rossello. Puerto Rico deserves a governor who is accountable, transparent and capable of leading the island to recovery after Hurricane Maria,” Sanders said via Twitter, referring to the natural disaster that killed nearly 3,000 people on the island and from which it is still suffering.

The island’s biggest rally yet against the governor, a citywide march organized by local unions and activists, was scheduled for Monday. 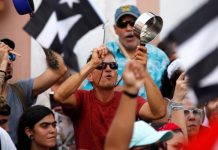 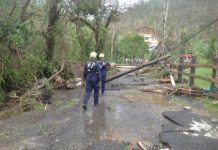