The meeting held in the German government’s villa outside Berlin at Merkel’s invitation,was the first high-profile bilateral visit since 2013, before Putin’s later annexation of Crimea deteriorated relations.

“Merkel is hedging and Putin is exploiting,” Josef Janning, senior policy fellow at the European Council on Foreign Relations in Berlin, told Bloomberg. “After Trump met Putin while attacking Merkel and the German economy,” she needs to have her own contact with Putin. She doesn’t want to give up the chance of keeping Putin within a margin that is manageable for Germany.”

The pipeline, called the Nord Stream 2 pipeline, would channel natural gas from Russia to Germany through the Baltic Sea.

The United States, which opposes the pipeline project over concerns about increasing Europe’s dependence on Russian natural gas, was not present, but could have a big say in the outcome, the Wall Street Journal reported. U.S. officials have discussed sanctions against certain companies related to the project, but action wasn’t imminent.

“Together with German partners we are working on the new natural gas pipeline Nord Stream 2, which will complete the European gas transport system, minimize the transit risks, and secure the growing consumption in Europe,” a joint press statement from Putin said ahead of the meeting.

Ukrainian officials are concerned Russia could stop delivering natural gas through Ukraine, which works as a transit country for Russian natural-gas export to the European Union and levies a fee on the trade, after Gazprom’s transit contract expires at the end of 2019, since there would be less demand for it.

“In my view Ukraine must retain its role in the transit of gas,” Merkel told the WSJ on Saturday.

The pipeline was a key topic in the two leaders’ bilateral talks, which also included other controversial issues such as stability in Ukraine and Syria and the future of the Iran nuclear deal.

The New York Times reported that Putin asked Merkel for help in rebuilding Syria’s infrastructure, so refugees could return home.

“We must restore the supply of water and the sewage system,” along with access to medicine, he said. “These are the most basic things in which I think everyone is interested, including Europe.” 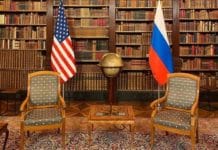