The queen, Royal family members, The Prince of Wales, The Duchess of Cornwall, The Duke of York, The Duke of Cambridge, Prince Harry and Meghan Markle arrived at the ceremony for Elizabeth — the world’s longest living reigning monarch.

“While all birthdays are special, this year, the Queen’s birthday falls at the end of the week-long Commonwealth Summit in London, which has brought together 53 countries,” her son Prince Charles said while leading her birthday wishes at the concert, the Telegraph reported.

“Tonight we pay tribute to her devotion to duty, her steadfastness in times of uncertainty, and her vital role in uniting people from all walks of life through her enduring strength and humanity,” he continued.

A Royal Family statement on its Twitter page read: “As we celebrate your 92nd birthday this evening and in recognition of your incredible life of service, I am delighted to say that the Queen’s Commonwealth Trust has now been launched to support young leaders around the Commonwealth.”

Harry said in his birthday remarks posted on the Royal Family’s social media “if you do not mind me saying, you are not someone who is easy to buy gifts for. But I think we have the perfect present,” referring to the charity recently launched in her name as the present.

It was also announced on Saturday that Harry was appointed as Commonwealth Youth Ambassador.

In the morning a band of Irish Guards played for the queen.

The queen actually celebrates two birthdays, her real birthday and an official birthday.

The celebration Saturday is of her real birthday since she was born on April 21, 1926.

However, her official birthday is on the second Saturday of June.

The official birthday is a tradition dating back more than 250 years when King George II born in November thought the weather was too cold for a big public celebration, a UK News article shows.

The official birthday is celebrated along with the annual military parade. 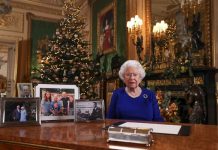 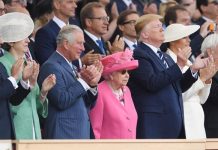