In the recording, obtained by British security firm Dryad Global, the Iranian vessel orders the Royal Navy frigate HMS Montrose to change the course of a ship, believed to be the Stena Imperno, for inspection, The Guardian reported.

“If you obey you will be safe. Alter your course 2,360 degrees immediately,” the Iranian vessel is heard saying.

Additionally, the HMS Montrose can be heard identifying itself in the recording and directing the Stena Impero to continue on its path.

“I reiterate as you are conducting transit passage in a recognized international strait, under international law your passage must not be impaired, impeded, obstructed or hampered,” the vessel states.

The frigate then asks the Iranian vessel to confirm it doesn’t intend to violate international law and the Iranian captain responds he intends to inspect the ship for security reasons.

The radio exchanges in the recording did not include an indication that the ship had been stopped due to an accident with a fishing vessel, as officials in Tehran had previously stated.

The Iranian Revolutionary Guard seized the Stena Impero for violating international maritime law by veering into Iranian waters in the Strait of Hormuz on Friday. A Liberian-flagged, British-owned MV Mesdar tanker was also stopped but was later allowed to continue on its course.

British Secretary of Foreign Affairs Jeremy Hunt said Iranians view the seizure of the ship as a “tit-for-tat situation” after British Royal Marines assisted in the seizure of the Iranian tanker Grace 1 off Gibraltar for violating European Union sanctions, but added “nothing could be further from the truth.”

British ships have been advised to stay away from the area where the ship was seized.

“Our priority continues to be to find a way to de-escalate the situation,” said Hunt. 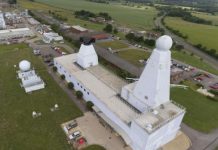