A loud explosion and gunfire were heard at the airport shortly before the plane carrying the cabinet officials arrived there.

Local media showed video footage of the blast at the airport. Initial reports said either mortars or drones were used in the attack.

The United Nations said the blast has reportedly killed at least 26 people and injured more than 50 others. Yemen’s Foreign Ministry said the number of casualties was near 100.

Authorities said none of the incoming government cabinet leaders were injured.

“We assure our [people] that all cabinet members are safe and [the] cowardly terrorist attack by Iran-backed Houthi militia on Aden airport will not deter us [from] our duty and our life isn’t more valuable than other Yemenis,” Al-Eryani tweeted.

“May Allah have mercy on souls of martyrs and wish fast recovery for [the] injured.”

One journalist was killed and 10 others were injured in the blast, he said.

The International Committee of the Red Cross said three of its staff were also killed in the blast and three others, one seriously, were injured. They were transitioning through the airport when the explosion occurred, it said.

Doctors Without Borders said via Twitter following the attack it was preparing a “mass casualty medical response plan” at its trauma hospital in Aden, and it has received at least 17 wounded referred to them from the local Al Gumhoria Hospital, 11 of whom remained in its care after six were treated and discharged.

The newly formed Yemeni government, which was sworn in this month, was supposed to be a step toward ending the long-running civil war that has killed thousands and evolved into one of the world’s deadliest humanitarian crises.

Saeed tweeted that Wednesday’s attack will only increase Yemeni determination to keep the government functioning until the Houthi insurrection is defeated.

The Yemen Ministry of Foreign Affairs said in a statement that evidence indicates that “the Houthi militia is the party that carried out this terrorist act.”

Three missiles were used in the attack and techniques the Houthi rebels have previously deployed were utilized, though the ministry offered no specifics.

It said the targeting of a civilian airport “is a flagrant violation of international humanitarian law and a heinous terrorist crime” that requires condemnation of the international community.

On Twitter, it published on-the-ground footage of that blast and said an investigation was being conducted to determine its size, which would prove the Houthis were responsible.

The United Nations and the Untied States were quick to condemn the attack.

Farhan Haq, the spokesman for U.N. Secretary-General Antonio Guterres, said in a statement that Guterres, following the attack, reaffirmed the United Nations’ “steadfast commitment” to resume a Yemeni-led and -owned political process to reach “an inclusive, negotiated settlement to the conflict.”

Cale Brown, principal deputy spokesman for the U.S. State Department, said the United States condemns and is “deeply saddened” by that attack, but that it will not stop the ongoing peace effort.

“These violent acts must end, and the perpetrators must be brought to justice,” Brown said in a statement. “The United States supports the legitimate government of Yemen as they work toward a better future.”

“The forces of good and sincere intentions will always triumph over the forces of evil and their various tools,” he said. 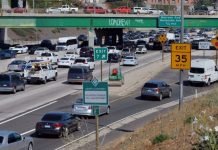