April 18 (UPI) — Barbara Bush, wife of one U.S. president and mother to another, died Tuesday in Texas at age 92.

Here are some of thoughts and remembrances being shared by those who knew her:

“Barbara Bush was a fabulous first lady and a woman unlike any other who brought levity, love and literacy to millions. To us, she was so much more. Mom kept us on our toes and kept us laughing until the end. I’m a lucky man that Barbara Bush was my mother. Our family will miss her dearly, and we thank you all for your prayers and good wishes.”

“Barbara Bush was a remarkable woman. She had grit & grace, brains & beauty. She was fierce & feisty in support of her family & friends, her country & her causes. She showed us what an honest, vibrant, full life looks like. Hillary and I mourn her passing and bless her memory.”

“Barbara Bush was an incredible First Lady and an iconic American. She was also one of the funniest people I’ve ever met. Gabby and I were honored to know her. May she rest in peace.”

“We’ll always be grateful to Mrs. Bush for the generosity she showed to us throughout our time in the White House, but we’re even more grateful for the way she lived her life — as a testament to the fact that public service is an important and noble calling; as an example of the humility and decency that reflects the very best of the American spirit.”

“She dedicated her life to books — and to making sure people could read them: the poor, immigrants new to our country, people who just couldn’t learn…the Barbara Bush Foundation for Family Literacy taught them all. Millions and millions of dollars raised to help others unlock the most powerful weapons in the universe: books and ideas. When my kids were born, she told me to read to them. She told me it wasn’t the story that mattered — it was being that close and sharing that time together.”

“The way Mrs. Bush took in so many showed me two additional lessons: not only what it means to be big-hearted, but also how to be quiet about it. She was unfailingly generous, but she tolerated no horn-tooting.”

“Barbara raised a family of service & character, stood by her beloved husband in the best & worst of times, and spoke her convictions with courage & passion. The great First Lady of our times. Ann and I will profoundly miss her friendship, her compassion, & the twinkle of her eye.”

“Former First Lady Barbara Bush was one of the early supporters of closed captioning. She was welcoming, she was real and she was funny. When I looked for a coaster to set my tea cup on the White House living quarters, she said, ‘Put it anywhere; the furniture is old!’ RIP.”

“She championed courage and a sense of self-worth that was rivaled only by her life-long devotion to George H.W. Bush.”

“We all stood a little taller because we were associated with Mrs. Bush. Her unwavering support for children’s health and deep commitment to the hospital that bears her name moved many to share her passion and improve the health of our state’s youngest and most vulnerable patients.”

“From her scrappy demeanor and no-frills style to her boundless passion for family, literacy and freedom, Barbara Bush was America at its best. Her children were blessed to call her mother; our country blessed to call her First Lady. She’ll live on in the heart of our Nation.” 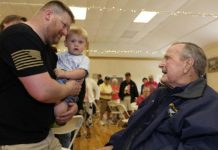 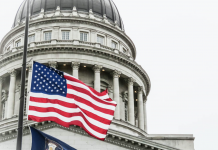 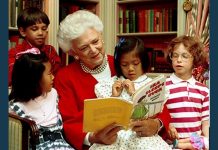