Jan. 30 (UPI) — Rep. Stephen Lynch has tested positive for COVID-19, a spokeswoman said, making him the second member of Congress from Massachusetts to come down with the virus this week.

Molly Rose Tarpey, Lynch’s director of communications, said he got the novel coronavirus despite receiving two doses of the Pfizer vaccine.

“This afternoon U.S. Representative Stephen F. Lynch received a positive test result for COVID-19 after a staff member in the congressman’s Boston office had tested positive earlier in the week,” Tarpey said in a statement released Friday.

“Congressman Lynch had received the second dose of the Pfizer vaccine and subsequently received a negative COVID-19 test prior to attending President [Joe] Biden’s Inauguration. While Mr. Lynch remains asymptomatic and feels fine, he will self-quarantine and will vote by proxy in Congress during the coming week.”

The announcement came one day after another U.S. House member from Massachusetts, Lori Trahan, announced she tested positive for the virus.

“I am fortunate to currently be asymptomatic, and I have immediately begun to self-quarantine. Both my Massachusetts and Washington offices will continue to operate remotely, and I plan to cast my votes next week using the House’s proxy voting system,” Trahan said Thursday in a statement posted to Twitter.

“I encourage everyone to continue taking this virus seriously and to follow the science and data-driven guidance to wear a mask, maintain a safe social distance from others, avoid large gatherings and stay home whenever possible.”

Dozens of members of the House and Senate have tested positive for the novel coronavirus in the past year of its spread through the United States. Several have taken place since the Jan. 6 siege at the Capitol in which lawmakers were forced to go into hiding together inside the building — some refusing to wear masks. 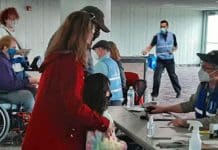